The Most Succulent Oriental Desserts in Egypt You Should Try

Little bites from heaven are all it takes to change the mood of the day into a super joyful one. We all like to satisfy our sweet tooth and cravings every now and then. But, have you ever tried the mouthwatering oriental desserts in Egypt? Well, Egypt is home to one of the world’s most unsurpassed cuisines, but let’s drop the spotlight on the wide variety of sweets you can have.

Some of the traditional and popular desserts in Egypt may have originated in different places. Oriental desserts are quite known almost everywhere in the Arab world. However, you can find several variations to the dish, depending on the region.

Despite the diverse cultures that come together to create some of the desserts on this list, the addition of the Egyptian touch takes it to a whole new level. Check out this list of the best oriental desserts that you must try while in Egypt.

When someone says oriental desserts, images of the mouthwatering basbousa come to mind. Basbousa is one of the authentic Egyptian sweets that you can never get enough of. It is a semolina cake with a very soft texture resulting from being syrup-soaked. Fresh cream and mixed nuts top the sugary pieces to add extra sweetness.

This dessert either goes by this name or, in some cases, louqmet el qady, which means the Judge’s Food. No one knows the reason behind this naming, but it won’t matter much once you take a bit of those crunchy balls. Zalabya is little pieces of dough shaped into small balls and fried to golden. Once they’re ready, they are soaked in a sweet syrup, usually honey, and, sometimes, sprinkled with sugar. It is made with new flavors now, including Nutella, Biscotti Lotus, or white chocolate.

Oriental desserts can bear some resemblance to each other but the ingredients used are what set the difference. Harissa is another popular dessert in Egypt that is often confused with Basbousa. It is another semolina cake soaked in sweet syrup. However, it is usually filled with a cream filling along with coconut. The top is embellished with some almond nuts for an extra golden accent.

Om Ali is among the traditional oriental desserts that circulate in every corner of Egypt. It literally translates into Ali’s Mother and while there must be an interesting story behind the naming, let’s focus now on its delectable ingredients. Om Ali is a bread pudding mixed with sweet milk and has several crunchy ingredients added. It contains raisins, coconut flakes, and raisins to add a nice crisp.

A chief sweet dish in the long list of appetizing oriental desserts is qatayef. It is popular in Egypt and most of the Arab World, thanks to its perfect balance between firmness and delicateness. Qatayef is a sweet pastry perfectly folded, with sweet fillings like cream and nuts sprucing up its taste. New variations have come into being, including Nutella and Biscotti Lotus as the latest fillings of this pure goodness.

Kunafa is a dessert staple that has always been taking the food scene in Egypt by storm. It is quite popular in every country in the Middle East and the Arab World. This fascinating spun pastry is syrup-soaked, being paired with several ingredients that vary based on the region.

It usually has a soft layer of cheese, and sometimes comes with cream paired with pistachios and nuts. Kunafa makes a strong appearance in Ramadan more than most of the other months of the year. Every year, new variations are introduced and in the most expected ways. We have lived to see kunafa paired with Nutella, Lotus, mangoes, and tiramisu cake.

Kahk is the Egyptian version of cookies. It is a small rounded biscuit covered with powdered sugar. In some cases, it would be stuffed with different nuts, either agameya, pistachios, or dates. More often than not, it is served plain with only a generous dash of powdered sugar on top.

Kahk is one of the oriental desserts that appear during the Feast, or El Eid in Arabic. It is an Islamic celebration that takes place right after Ramadan. Eid El Fitr, the feast of Kahk, is the earlier feast of two official holidays in the Islamic Calendar, marking the end of Ramadan.

This dreamy dish is an Egyptian classic that you should try. Rice pudding is quite popular in most Middle Eastern countries, including Greece and Italy, but it is more commonly known to be one of the oriental desserts. The creamy dish is a sweet mixture between milk and rice, along with other flavorful ingredients like cinnamon, raisins, vanilla, or coconut shreds.

Mahalabia is another sweet pudding that accentuates the appetizing list of oriental desserts. It has several variations, depending on the region. In Egypt, this creamy dish is made with sweet milk, flour, corn starch, and sugar. The flavors that are most commonly used are either cinnamon or vanilla. It may bear some resemblance to the rice pudding, except that it doesn’t include rice. In the Levant regions, rose water and orange blossom water are among the ingredients used to create Mahalabia.

Baklawa is one of the most traditional oriental desserts consumed in Egypt. It has traveled to Egypt during the reign of the Ottoman Empire, but it is pronounced as Baklawa rather than, the Turkish version, Baklava. This small semi-round dessert is made of layered filo pastry, soaked in sweet syrup and honey, and stuffed with chopped nuts.

Funnel cake has an Egyptian version known as Meshabek. We can actually refer to it as one of the oriental desserts although it is more popular in the Egyptian region. However, you can still find it across different countries in the Arab World.

Meshabek is an Arabic word that literally translates into “Tangled” and that explains the shape of this sweet dessert. This tube-shaped delicacy is made up of lots of sugar along with flour, oil, and corn starch. The ingredients are mixed together and designed into a rounded tube shape before getting fried.

It is funny how Egyptians are capable of taking a root vegetable and making a sweet treat out of it. Sweet potato, known as Batata in Egypt, is one of the most consumed oriental desserts in the region. It makes a very special appearance during the chilling days of winter. People like to munch on some steaming hot batata for warmth and some sweet indulgence as well.

We are not calling it sweet goulash for being sugary, even though it is, but because there is a savory version to this sickly pastry. It bears a great resemblance to Baklava in how layered the pastry is. Soaked in sweet syrup, goulash is cut into large slices in comparison to Baklava. Meanwhile, it is commonly stuffed with pistachios or nuts. This sweet delicacy is popular in different countries beyond Egypt, including Turkey, Morocco, and Greece.

Qammar El Deen is an apricot-based beverage that has a nicely balanced-out sweetness. It is popular among the beverages that make a special appearance during Ramadan but seems to vanish throughout the rest of the year. This sickly drink can be made into a creamy pudding and eaten instead of drunk.

It is made by blending the dry apricot pieces with cream, starch, sugar, and water. Then, it is served as the most delicious pudding you can ever taste. While it is not among the very popular oriental desserts and seems to be a question mark to outsiders, the Arabs are quite familiar with it, especially Arab Muslims.

Halawa Tahinia is the name most commonly used among Egyptians, but Tahini Halva is used on a broader scale of regions. This dessert is not only one of the renowned oriental desserts, but it is also a Mediterranean and Middle Eastern one. It is made with tahini paste, and sesame seeds, mixed with the milk powder, rosewater, and powdered sugar. Usually, you will find chopped pistachios scattered inside the hard-paste, but there is also a plain version of it.

Ghorayeba is the Egyptian version of shortbread, except that it is not crunchy. It bears a great resemblance to cookies and even uses almost the same ingredients minus the eggs. These freshly baked cookies are pieces from heaven that you can treat yourself to when looking for something quite sweet yet light as air.

Here comes the end of this luscious list of oriental desserts. We have gathered for you the most popular ones in Egypt and other places. It is time to take your taste buds on an exciting adventure through the lands of sweet delicacies. 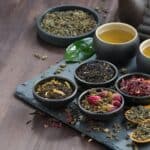 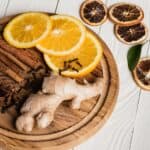 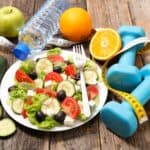