Paddy’s Day in Belfast: Where to Find the Best Guinness ☘️🍻

Here at Amazing Food & Drink, we love having any excuse to grab a pint of the black stuff. Luckily for us, the biggest excuse of the year is on it’s way: St Patrick’s Day. There’s no shortage of gorgeous traditional pubs across Belfast to grab a pint of Ireland’s favourite drink. To kick off the Paddy’s Day celebrations we’ve assembled a tasty list of the best pints of Guinness in Belfast. Check it out and drink responsibly! 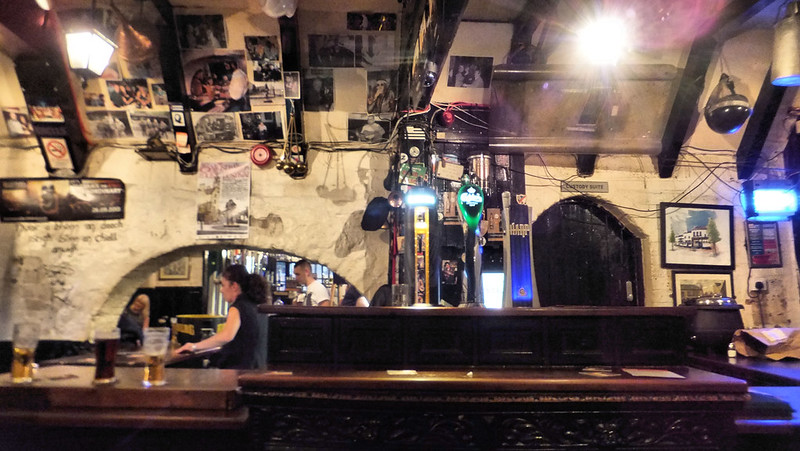 ‘Traditional Irish Pubs’ can be found all over the world, and most of them are poor attempts at the real thing. Kelly’s Cellars, however, offers a slice of the real thing. This local gem is oozing with history, and the cracks in it’s 300 year-old walls hark back to a forgotten Ireland. History lovers love Kelly’s Cellars for its revolutionary roots, used by the United Irishmen as a meeting point during their 1798 rebellion against British rule. Over two centuries later, Kelly’s Cellars offers open fires, live Irish traditional music and expertly-poured pints of Guinness. If you’re feeling peckish, we recommend checking out the Mourne Seafood Bar, just next door. 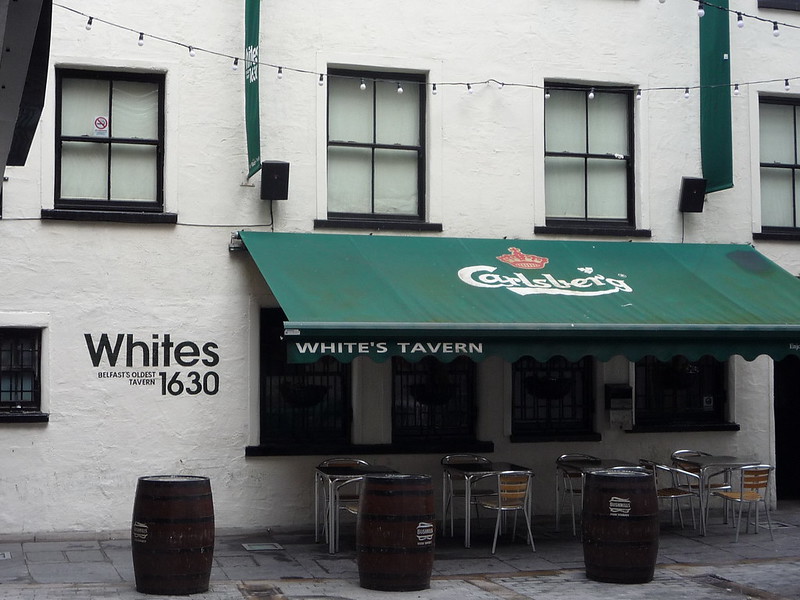 Self-advertised as Belfast’s oldest bar, White’s Tavern is as traditional as it gets (Source: Clem)

No list of Belfast’s best pints of Guinness would be complete without a mention of White’s Tavern. It proudly lays claim to being the oldest tavern in Belfast, being established in the city’s historic Winecellar Entry in 1630. Renowned for both it’s of Guinness and its seafood dishes, White’s has mastered the blend of old and new, offering it’s punters an efficient online booking system, craft ales and even an eclectic selection of electronic music on the second floor. We love White’s Taverns for its cost city centre location and its authentic, low-counter bar. It’s even in walking distance from Kelly’s Cellars – no taxis needed. 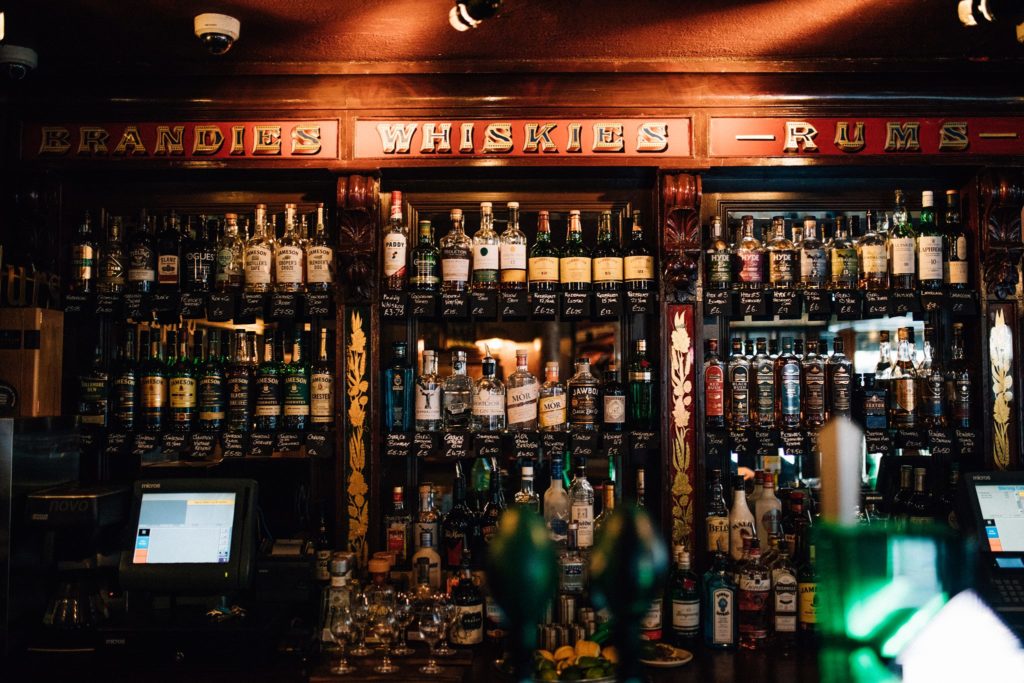 McHugh’s has stood as a silent witness to the growth of Belfast into the city we love today (Source: McHugh’s Bar @Facebook)

When we check out pubs like McHugh’s, we’re reminded why Belfast is the perfect place to be on Ireland’s favourite holiday. Like Kelly’s Cellars and White’s Tavern, this place is steeped in tradition, originally built between 1710 and 1715. With much of its original facade still intact, McHugh’s has stood witness to the rise, decline and recent renaissance of Belfast. The bar now offers a fusion of entertainment, art, culture and history, and is regularly cited as one of the best places in the city to grab a pint of the black stuff. Check out their social media for regular updates on live music and events on Paddy’s Day. 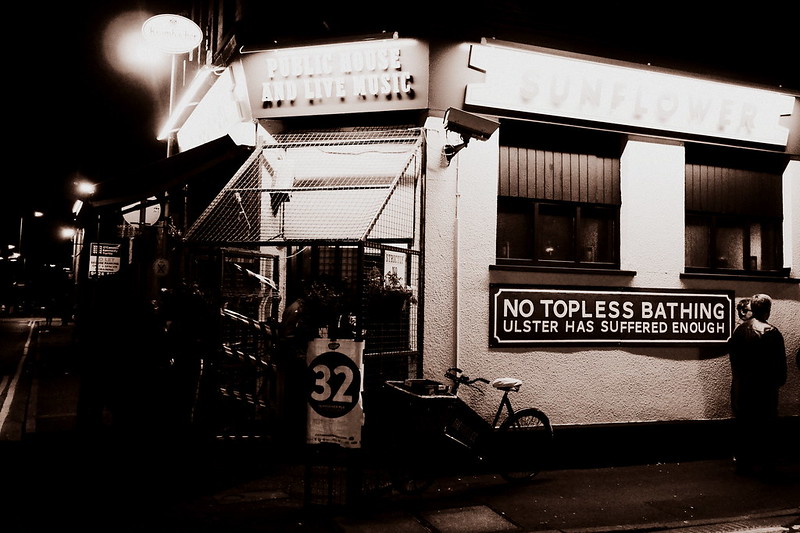 Famed for its Troubles-era exterior caging, The Sunflower has rested on the site of a public house for over a century. However, unlike others on this list, The Sunflower offers a distinctly modern vibe, with an eclectic selection of craft ales and a broad selection of music including traditional, disco, house and garage. We also love the woodfired pizza in the smoking area, which also regularly hosts live music, poetry readings and more. A true cultural hub and a nod to a changing Belfast, The Sunflower has emerged as a local favourite over the past ten years. The Guinness is good – but not as good as the craic.

The Duke of York 📷 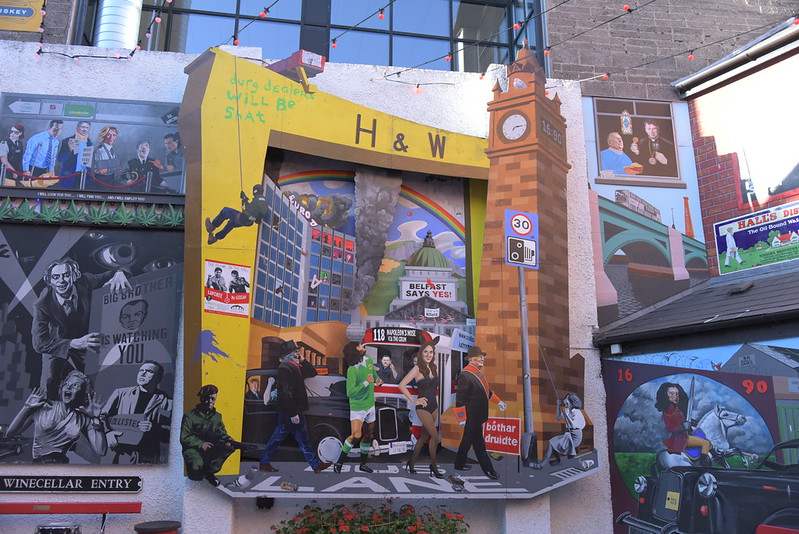 Just one of the awesome murals lining the outside of The Duke of York. Well worth a visit and a pint of Guinness! (Source: Christophe Becker)

Based in the heart of Belfast’s thriving and regenerating Cathedral Quarter, The Duke of York is one of the city’s best-loved bars. It has stood the test of time, rebuilding itself following a failed bomb attack on the High Courts in the early 1970’s. Now the pub is known for its murals and bric-a-brac interior, displaying relics that are true to the historical and cultural soul of the city. The street which houses The Duke of York has become an Instagram hotspot, famed for its fairy lights and floral displays. The Duke of York is a must-visit, and its pints of Guinness are a must-drink.

Paddy’s Day is on the way, and we can’t wait to wet our whistles with Ireland’s favourite stout, courtesy of Arthur Guinness himself. What are your plans for St. Patrick’s Day? Let us know in the comments and don’t forget to like, subscribe and share!